These days, home cooks are moving toward freshly prepared, light, and healthy dishes.  However, Louisiana cooks don’t always follow conventional wisdom. This time of year, you are just as likely to see a hearty etouffée or a platter of steak, rice, and gravy on the dinner table.  But with my Cream of Cauliflower Soup, you can have it all. 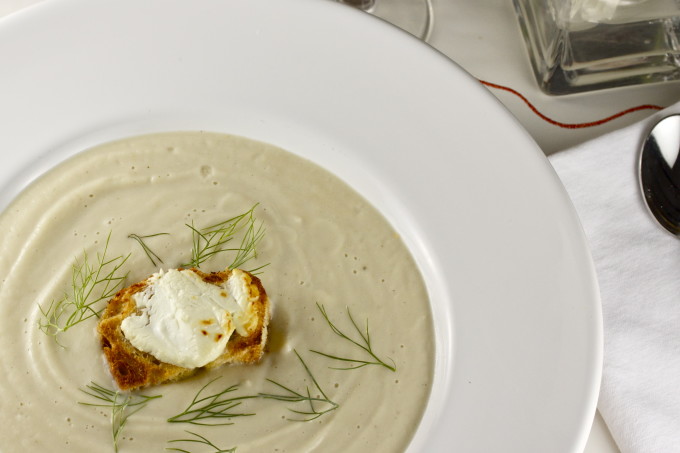 Cauliflower is the new potato in this healthy Cream of Cauliflower Soup. (All photos credit: George Graham)

My wife is an advocate of healthy eating.  The brilliance of her natural, whole foods lifestyle is in substituting ingredients that some down-home Cajun cooking traditionalists might view as unorthodox. 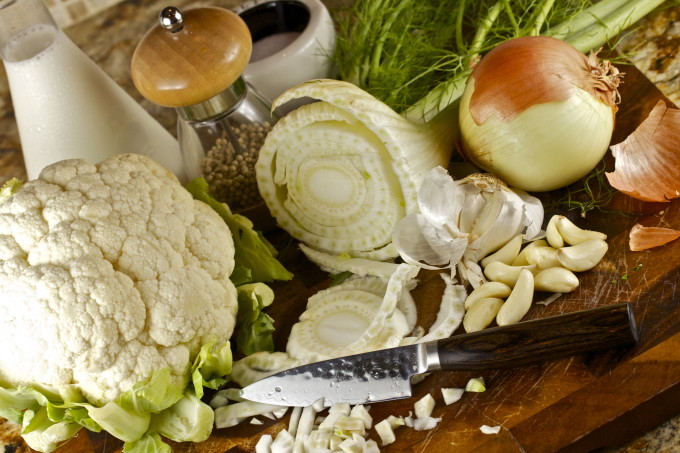 Natural and fresh ingredients are the key to this Cream of Cauliflower Soup.

Like most everyone I know, my family loves a velvety smooth, cream-based potato soup–true comfort food.  My wife and I developed a lower calorie, low-carb, natural version that doesn’t sacrifice taste or texture.  The answer:  Cream of Cauliflower Soup.

The value of nutritionally dense cauliflower is that it is low in fat and carbs, but high in vitamin C and fiber.  I prefer steaming because aggressive boiling reduces the levels of these compounds by as much as 75%. As a white vegetable, I initially thought the similarities of cauliflower to starchy carb-laden potatoes pretty much start and stop right there.  I know that cauliflower is not your typical Cajun recipe ingredient, but once I steamed a large head of cauliflower and took a stick blender to it, I began to see its potential as my new “potato” soup. 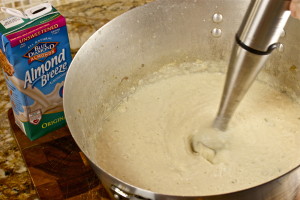 Cauliflower has a distinct taste that is difficult to mask–either you love it or hate it.  While I do not mind it, I intend to elevate it in a different direction with garlic, fennel and olive oil.  The anise-flavored fennel takes on a subtle sweetness when sautéed in olive oil and a smidgen of garlic.  And with a splash of almond milk, this Cream of Cauliflower Soup is rich and creamy but without the guilt and shame.

5.0 from 1 reviews
Cream of Cauliflower, Garlic and Fennel Soup with Goat Cheese Crouton
Print
Prep time
45 mins
Cook time
45 mins
Total time
1 hour 30 mins
Recipe by: George Graham - AcadianaTable.com
Serves: 4 to 6
Ingredients
Instructions
Notes
While the chicken stock veers away from the vegetarian heading of this recipe, I like the flavor it adds. Almond milk is a little-used ingredient that once you use in this soup will become your new secret weapon. The nutty hint of almond balances well with all of the other bold ingredients and adds that unmistakable creaminess that is needed to bring this soup together. While the goat cheese crouton is optional, it adds a crunchy contrast.
3.2.2708 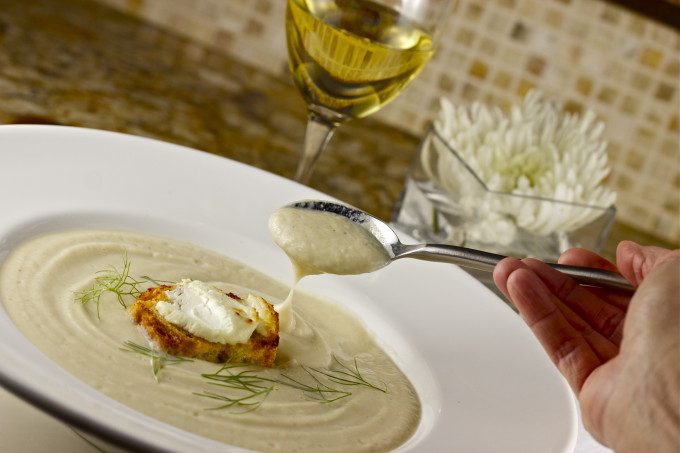 Cream of Cauliflower Soup: A spoonful of creaminess without the guilt.