“When they accepted their mission, our judges knew they’d have a challenge before them. But they had no idea there would be so many excellent stories submitted, with many more deserving of top honors. Still, they managed to narrow it down to fifteen stories you’re sure to enjoy.
Congratulations to the winners of our 2016 Short Story Contest!”
Editorial Staff
Southern Writers Magazine

A work of fiction by George Graham

“Tell you the truth, I ain’t given it much thought,” Miss Louise said coyly, when I asked why her pies had won so many prizes at the Magnolia County Free Fair. Year after year, this soft-spoken lady’s pies, cakes, and sweet dough tarts were tagged with winning ribbons of every color—mostly blue. And every year, the grande dames of the Harrisville Civic League complained. “Not fair!” they’d say with a hoity-toity air.   “She’s won enough. That gal should be disqualified.”

Notepad in hand, I sat at her yellow Formica-lined dining table while Miss Louise paced back and forth across the white linoleum tiles. Glancing down at the floor, I noticed by the well-worn scuffs and scratches leading from the flour-covered baker’s bench to the porcelain sink that she had walked this path many times before. As a food columnist writing for the largest newspaper in the state, I was on a mission to find out how this wisp of a woman had become the most feared competitor in statewide cooking circles. I expected to find a well-appointed kitchen laboratory of sorts that made pie baking less art and more science. What I found was utter simplicity—a timeworn kitchen with old-fangled appliances and a humble lady with over 80 years of baking experience.

As I eagerly stabbed my fork into another bite of her prize-winning bourbon pecan pie, my head was reeling, and I was feeling a tinge overwhelmed by the mingling of flavors, the textural contrasts, and the intensity of freshness. It was a revelation to my culinary sensibility, and I tried to refocus on the purpose for my meeting. I continued my interview to find out more.

“I been doin’ it this away since I was knee high and I ain’t goin’ change now—too old to change,” she said with a sly smile and a wink of her eye. For most cooks, the baking arts are an exact science of precise measurement, controlled oven temperature, and accurate timing. But for Miss Louise, it was instinct—a self-taught baker who learned her skills by watching a generation of self-taught masters before her. Without a formal education, her methods were primitive—lacking in the culinary sophistication of modern techniques.

Louise Jefferson Fairchild was born into a family of former slaves who sharecropped the farmland surrounding a Mississippi sugarcane plantation. Although free, they stayed on the farm in a mutual exchange of work for wages and a share of the land. Rather than attend grade school, she and her younger sisters tended to the livestock and chores of the main house as her poppa and older brothers plowed the fields. As was the custom, the oldest daughter worked in the kitchen. For Louise, pastry making was her lot in life. From the time she could reach the wooden bread bench while standing on an overturned sweet potato crate, she had her hands in dough.

Her recipes came from detailed memory, and her kitchen implements improvised. I could see an assortment of vintage odds and ends lining the windowsill above her kitchen sink. At first, I thought they were just a collection of junk, but I soon discovered they were cooking tools with the detailed precision that only Miss Louise could decipher.

As she made her goat cheese biscuits, I watched her with a prying eye and took notes. With an empty Clabber Girl can, she portioned just enough White Lily flour for her mix, and from an old six-ounce Coca-Cola bottle, she poured a measured amount of tart buttermilk to combine. As she cracked the first of three eggs, I was amazed at how brilliant the color of the yolk was—golden sunshine yellow, not pale and pallid. I paid close attention as she cupped salt in the crease of the palm of her weathered hand and pinched just enough between her thumb and forefinger to balance the mixture. She measured the goat’s milk cheese using a dowel rod notched with lines of progression for recipes known only to the agile mind of this gifted artisan. The dough was combined in no time at all, and with the sharp-edged lid of a Mason jar, she cut perfect bite-size biscuits. For a curious cook like me, it was enchanting.

“Never learnt numbers,” she said. “I just know what goes in each and every pie. That’s the way I always done it,” she modestly said as she placed the biscuit dough rounds in the preheated oven of her Tappan Deluxe.

As we talked, I learned about her long list of award-winning pastries. Her scuppernong sweet dough pies are half-moon-shaped hand-pies that combine the flakiest piecrust imaginable with the sweetness of the ripe fruit growing wild on the thick vines along the main road in front of her house.

“Leaf lard is what makes ‘em crispy like that, and my eggs come from my birds right there in the backyard,” she added while pulling aside the white lace curtain and pointing through the window to the hen house. Out among the pecan trees, I could see a dozen or so laying hens roaming free in the fenced-in yard with just as many goats and a couple of milking cows.

As I finished off my second helping of pie, it was becoming clear to me what her secrets were as I prodded to know more. “Miss Louise, please tell me how you make this pecan pie so sweet and delicious,” I asked politely. I could see her hesitating to answer; most cooks don’t like to share their secrets.

“Was a time I wouldn’t talk about my cooking. Guess I didn’t want nobody snooping around my kitchen and finding out my ways. Too old for that now, and I don’t mind telling you so maybe my pies will live on after I’m gone to be with the Lawd,” she said. I could see she was serious about sharing her secrets as she pulled out the metal chair and had a seat at the kitchen table next to me.

“Most folks use that store-bought Karo syrup, but I use sugarcane. I was raised up stirring a cane kettle, and I don’t mind making up a big batch of blackstrap molasses every season for my winter baking,” she said as she turned in her chair and opened the door to the cabinet under the sink. There, plain as day, sitting right next to a half-filled bottle of Old Crow whiskey was a gallon jug of the intensely dark syrup.  She was divulging her culinary secrets to me, and I felt privileged to enter her world.

She slowly got up and walked over to an old metal pantry and swung open the doors that creaked with as much age as Miss Louise herself. She reached for a large quart jar.

“This my honey from them hives over yonder along that tree line,” she said, pointing out the window to a line of longleaf pines on the border of the property. As she opened the jar and offered me a taste, I could see the honeycomb glistening in the center of the jar. I licked the sweet nectar from the tip of my finger; it was glorious.

“You tasting satsuma blossom from my bees that go over to old Mister Lawson’s tree on the next farm. I share my honey with Mister, and he share his fruit with me,” she said, reaching into the bowl beside her for a ripe satsuma. “I reckon he love my satsuma ice box pie so much he’d strip that tree of fruit every year and give it up to me for just one bite.”

The secrets to Miss Louise’s culinary mysticism were now fully revealed to me—all hidden in plain sight. To see them, all I had to do was look around the room: the butter churn leaning against the screened pie safe, the box under the cedar cupboard stacked with fresh sweet potatoes, the burlap bag brimming over with unshelled pecans, and row upon row of preserved figs, peaches, and blackberries lining the back porch shelves. It struck me that most every ingredient in Miss Louise’s vast recipe archive was grown, raised, and harvested within a hundred yards of her kitchen. Her secret was uncomplicated: She understood that fresh, natural ingredients sourced locally and tended lovingly are far superior to anything you can buy in a supermarket aisle.

As I drove back to town munching on a sack full of her goat cheese biscuits, I thought about how and when I would write this story. And I came to a quick conclusion that the fussy old matrons of the Harrisville Civic League could go on wondering how Miss Louise managed to knock them out of competition year after year. Her secrets were safe with me. 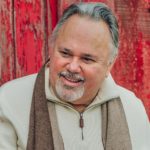 When George Graham sinks his teeth into a juicy story, you can be assured it will be in good taste. He is a food writer who is curious about his subject and passionate about his craft. An award-winning cook, photographer, and author, his 320-page cookbook collection of stories and recipes Acadiana Table: Cajun and Creole Home Cooking from the Heart of Louisiana published by Harvard Common Press is now in bookstores nationwide.

George has lived in South Louisiana for all his life. He has been an avid student, chronicler, and photographer of the region’s culture and culinary traditions. Born into a restaurant family and a former restaurateur himself, he has written about Southern food for newspapers, magazines, and he has been a finalist on television’s Food Network Challenge. In 2013 he launched the blog Acadiana Table: George Graham’s Stories of Louisiana Cooking and Cajun/Creole Culture, which already has been a finalist for Best Food Blog: Regional Cuisine in Saveur magazine’s 2014 Best Food Blog Awards and also for Best Food Blog in the 2015 IACP Digital Media Awards–a remarkable record for such a young blog.