Chicken just got a Cajun makeover in this Jockamo Chicken with Fettuccine in a Smoked Tasso Cream recipe featuring the malty flavor of beer in a cream reduction.  Spiked with seasoned tasso ham and grated Romano cheese, we’re elevating chicken to new heights. 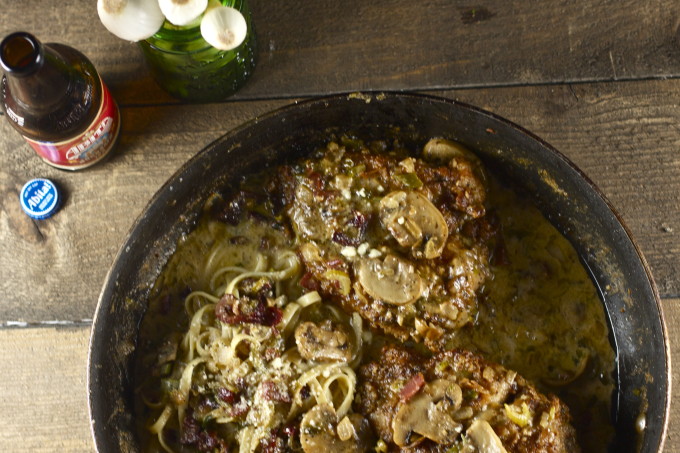 Not sure exactly how it happened, but there’s been a cruel trick played on the men of this world and I am out to correct the injustice.  At some point in history, it seems there was a secret agreement among all women that the custom of Father’s Day is to be celebrated by dads everywhere toiling all day long, sweating in the sweltering Louisiana heat over a hot barbecue pit cooking up a big spread while the women relax in the shade sipping sweet tea.  Not only does papa have to bring home the bacon, but on the one and only day of the year held in his honor, he has to cook it up on the grill.

Give us a break.

It’s time to turn the tables on mom.  I’m laying down my fork and spatula.  I’m proposing a boycott (appropriate name) or call it a sit-down strike at the dinner table to put an end to this travesty of tradition.  This Father’s Day, I am proposing a recipe for Jockamo Chicken with Fettuccine that every mom can make and every dad will rejoice in.  It’s creamy, it’s spicy, it’s smoky and, best of all, this recipe features dad’s favorite–beer.

As all Acadiana men know, Louisiana has a long beer-drinking history that dates back to the original Jackson Brewery in the late 1800s.  Jax became one of the top beers in the country and other Louisiana bottled brews have followed–Regal, Falstaff and Dixie to name a few.  Most faded out, and a new group of craft beers has surfaced led in 1986 by the Abita Brewing Company located on the Northshore of Lake Pontchartrain. Abita has quickly gained cult status with serious beer-drinking dads who love their heady brews with catchy names. It’s time to brew up an original Father’s Day dish that balances the deep and spicy notes of the hops with the sweet backbeat of the malt.

Two of my favorite Italian recipes are Veal Marsala and Fettucine Alfredo.  So, for this Father’s Day, I’ve put a Cajun spin on these ethnic favorites.  I am replacing the Marsala wine with Abita beer, chicken instead of veal, and I elevate the pasta with a smoky tasso cream reduction.

Cream reduction is a very common Cajun cooking technique of sauce-making, and when combined with bold ingredients, it elevates a variety of Cajun recipes and dishes.  The only secret to a good reduction is to start with good cream.  Grade A, heavy whipping cream is a must and a wide pan help the thickening process by expanding the surface area.  The timeless French method of simmering cream slowly over a low fire creates bubbles that allow moisture–water–to escape.  The result is a smooth, velvety reduction that coats the back of a spoon or any number of center of the plate choices–veal cutlets, lamb chops, fish filets.

A basic cream reduction serves as a medium for infusing flavor.  In my Jockamo Chicken with Fettuccine we take a paneed boneless chicken breast that is lightly breaded and sauced with a mushroom and tasso-infused, cream reduction served over fettuccine.  And in this version we spike the cream sauce with Abita beer, a bold and sassy brew with a character all its own.  It’s that boldness that carries this Cajun recipe and lays a solid foundation on which to build this reduction.

So, I implore all you kitchen queens and black pot princesses out there, please give us a once-a-year break.  Help put an end to this misguided madness.  The fathers in your family will love this dish and will love you for making it, and making Father’s Day their one day of honor.

Men, you can thank me later. 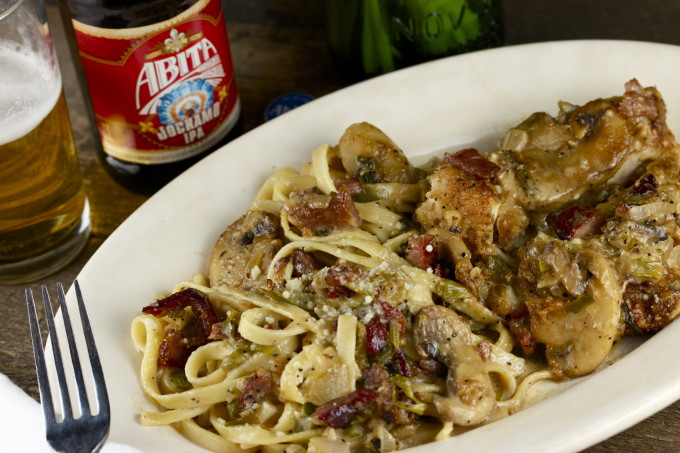 Jockamo Chicken with Fettuccine – a Cajun recipe version of an Italian classic.

5.0 from 4 reviews
Jockamo Chicken with Fettuccine in a Smoked Tasso Cream Reduction
Print
Prep time
45 mins
Cook time
60 mins
Total time
1 hour 45 mins
Recipe by: George Graham - AcadianaTable.com
Serves: 4
Ingredients
Instructions
Notes
I suggest the meaty boneless chicken breasts you can find at most meat counters — a thick piece of chicken to ensure this recipe doesn’t dry out. Be sure to use fresh rosemary -- it really makes a difference. As well, freshly grated Pecorino Romano is important.
3.5.3217
YOUR SEAT AT THE TABLE:  If you like this Cajun cooking story and Cajun recipe then accept my personal invitation to subscribe by entering your email at the bottom or top right of this page.  It’s quick and painless.  You will receive an email alert and be the first to see when new Cajun cooking stories and Cajun recipes are added.  Thanks, George.
« Sweet Dough. Sweet Life.
Grilled Apricot and Herb Salad »