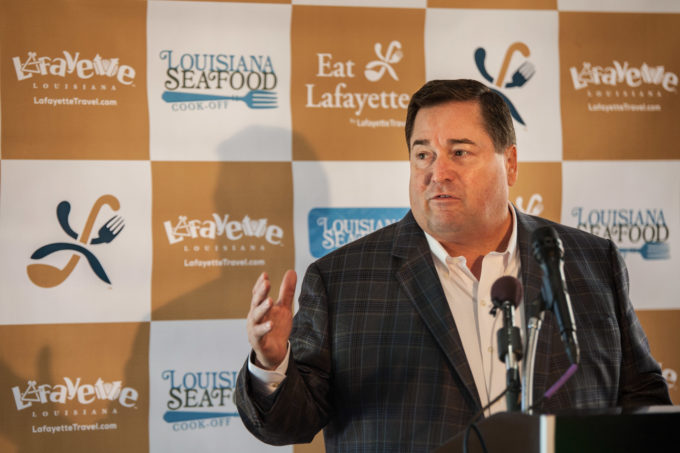 BATON ROUGE – May 5, 2017 – Lt. Gov. Billy Nungesser and the Louisiana Seafood Promotion and Marketing Board have announced the 12 chefs from across the state chosen to participate in the 10th annual Louisiana Seafood Cook-Off, which will be held Tuesday, June 20 at the Cajundome Convention Center in Lafayette, Louisiana.

While the event is marking a decade in existence, it is the first time it has been held outside of New Orleans and what better place than the city said to have more restaurants per capita than any other American city.  Lafayette also holds the distinction of being named “Best for Food” by Rand McNally in 2011 and “Tastiest Town in the South” by Southern Living magazine in 2012. Many of the restaurants that have helped earn those titles will be a part of the event serving samples to spectators as a part of the opening event for Eat Lafayette, which will take place in conjunction with the Cook-Off.

“The winner of the Louisiana Seafood Cook-Off plays a very important role in educating people from around the world on the flavor and sustainability of Louisiana seafood, which is a core piece of our culture, from fine dining to backyard boils,” Lt. Gov. Nungesser said. “Louisiana is the largest seafood producer in the contiguous U.S. and the quality is unsurpassed, which is why our chefs say, ‘Know Better, Eat Better.”

In addition to earning the title of King or Queen of Louisiana Seafood, the winner will represent the state at a variety of events including the Great American Seafood Cook-Off taking place in New Orleans this August, which is also hosted by the Louisiana Seafood Promotion and Marketing Board. Previous winners of the Louisiana Seafood Cook-Off (in order of their wins) are chefs Brian Landry, Tory McPhail, Chris Lusk, Cory Bahr, Keith and Nealy Frentz, Cody and Samantha Carroll, Aaron Burgau, Michael Brewer and reigning King Blake Phillips.

Just under 30 chefs submitted an application in the hopes of competing.  Information on previous cook-offs and updates on the event may be found at www.LouisianaSeafoodCookOff.com

“By moving the Cook-Off to Lafayette, I hope to draw attention to the fact that the state’s top chefs and great seafood can be found anywhere from our largest cities to our smallest towns,” said Nungesser. “The event itself will no doubt enjoy a little extra seasoning by taking place where Cajun and Creole culture thrive. I know our Lafayette hosts will make this a memorable evening for competing chefs and spectators alike.”