When I saw the bin of ripe green bell peppers at my local farmer’s market, I immediately thought of stuffing them.  In Cajun country, stuffing sweet peppers with ground anything is a basic Cajun recipe that every home cook knows by heart.  Usually it’s a mixture of beef and pork sausage with just the right amount of spice and rice to pump up the volume and the tenderness.  Red gravy or a dark roux-based sauce is the usual coating to anoint this traditional South Louisiana dish.  I love it so. 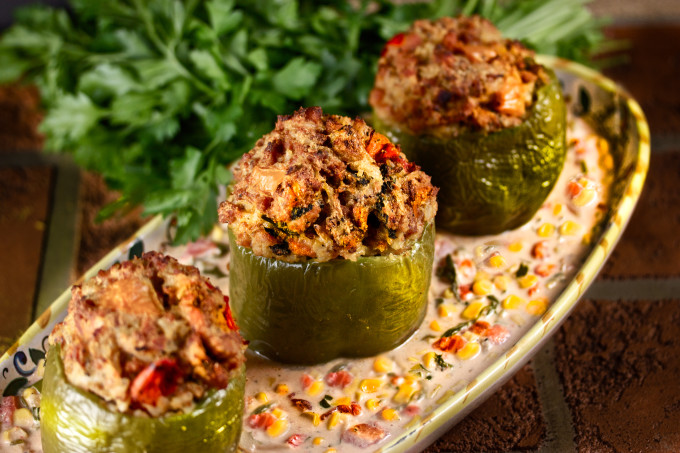 A twist on a Cajun recipe classic, my Chicken-Stuffed Bell Peppers use ground chicken instead of beef or pork. (All photos credit: George Graham)

But, I’ve taken a vow of abstinence from anything remotely calorie-laden or fat provoking.  My resolution was taken in a weakened state of mind.  I wasn’t thinking about all the great dishes to come in the spring and summer or how insanely difficult my goal would be–after all, we’re writing a food blog here.  Oh well, maybe I can still have my calorie-laden cake and eat it, too.  Break out the peppers.

Ground chicken–either grinding your own or buying it pre-ground–is a trade-off I am willing to embrace for this Cajun recipe for Chicken-Stuffed Bell Peppers.  Mixed with Louisiana long-grain white rice and my hand-made bread crumbs this chicken should maintain moisture and have just enough fat content to be flavorful and juicy.  Hmmm, maybe it needs a sauce.

Corn maque choux (mock shoe) is a Cajun recipe that actually appeared in South Louisiana long before the Grand Dérangement in 1755 brought the French Acadians to their new home.  One of the strong culinary influences in Louisiana is a result of its Native American heritage.  Indians made their mark on the eating habits of Europeans and Africans, connecting them to many of the truly unique tastes of Louisiana.  Choctaws, Chitimacha, Tunica-Biloxi and Coushatta are just some of the many tribes of South Louisiana, and their dishes are legendary.

Tribal cooking gave us filé powder, a thickening spice from the sassafras root which is a mainstay of Cajun gumbo.  Trapping turtle and hand-fishing for catfish is traced to Indian culture.  But it is their traditional reverence for corn that took an especially tasteful turn in the ever-popular corn maque choux.

A spicy mixture of corn and peppers with a little creaminess, this is the perfect sauce for my Chicken-Stuffed Bell Peppers experiment.  When made with goat’s milk from my friend West Constantine’s WesMar Farms in Avoyelles Parish, it lightens the load yet elevates the rich flavor of my lighter version.

Whether it is fit for a diet or not, I will leave to the dieticians out there.  All I know is that this Chicken-Stuffed Bell Peppers recipe is at the top of my repertoire of variations of traditional Cajun recipes that work beautifully.  I urge you to try it, and don’t even tell your guests it cuts the calories and fat–or so I say. 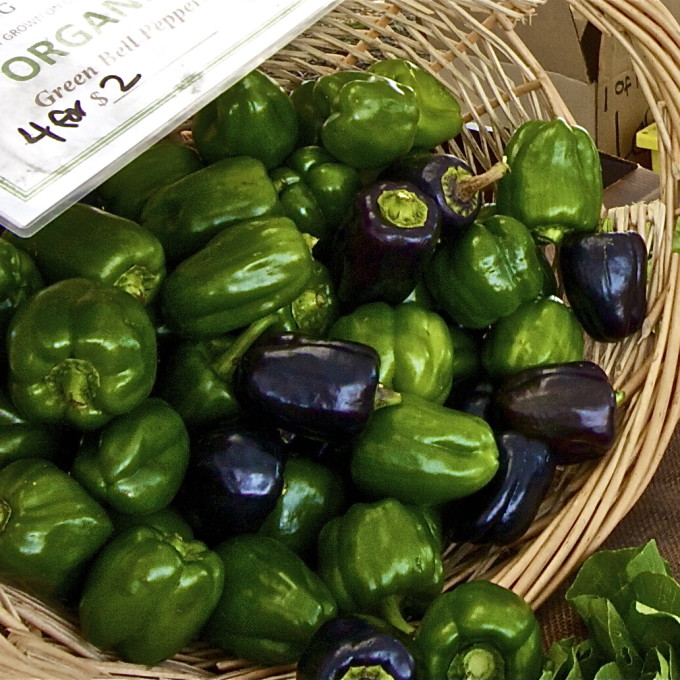 Green bells at the Horse Farm farmer’s market are the key ingredient in this Cajun recipe for Chicken-Stuffed Bell Peppers. 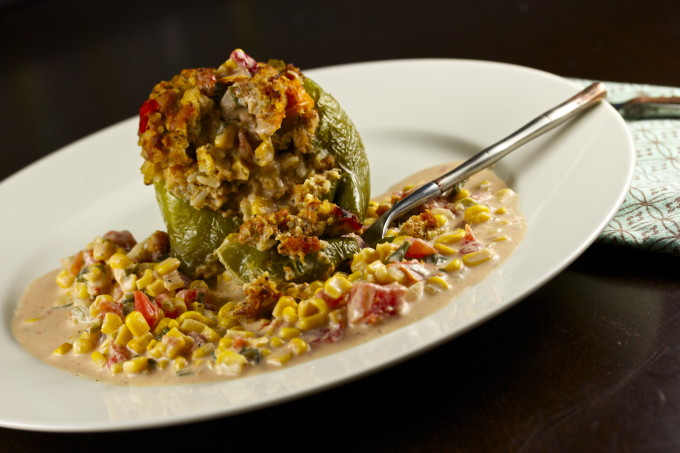